Happy Mid-September! I’ve got a bunch ‘o cool news to share this month…

1) Check out our new Kickstarter Campaign to help fund Jason’s latest indie movie, an hysterically funny m/m rom-com called Analysis Paralysis! (Fun backer rewards include “Be a beta-reader for my next SEAL book!” Which, incidentally, is a TDD book featuring SEAL Team Ten… More below…)

2) New England premiere of Russian Doll (my production company’s latest LGBTQ thriller movie!): Sunday, Sept. 17, at 5:45 at the Hanover Theater in Worcester, MA. Join writer/director Ed Gaffney, lots of local cast and crew, and me for a screening and a Q&A discussion after!

3) I’m leading a Reading Without Walls Book Club at the Bacon Free Library in South Natick, MA, and our next meeting is Weds., Sept. 27th at 7:00 p.m. We’re discussing Louise Gornall’s wildly entertaining YA romance Under Rose-Tainted Skies. Come and chat!

4) On e-sale for $2.99: Body Language—one of my early rom-coms, originally published in 1998! (Star Trek Alert: The heroine of this book is named Cassandra Kirk, and she owns a business called Video Enterprises. Romance Trope Alert: Friends-to-lovers and Pygmalian/make-over!!)

And… here are the details:

1) Analysis Paralysis: We’re making another LGBTQ movie. The incredibly funny script is by the comedy writing duo of Jason T. Gaffney and Ed Gaffney (aka my son and his dad).

Find out more about the film on our Kickstarter page: 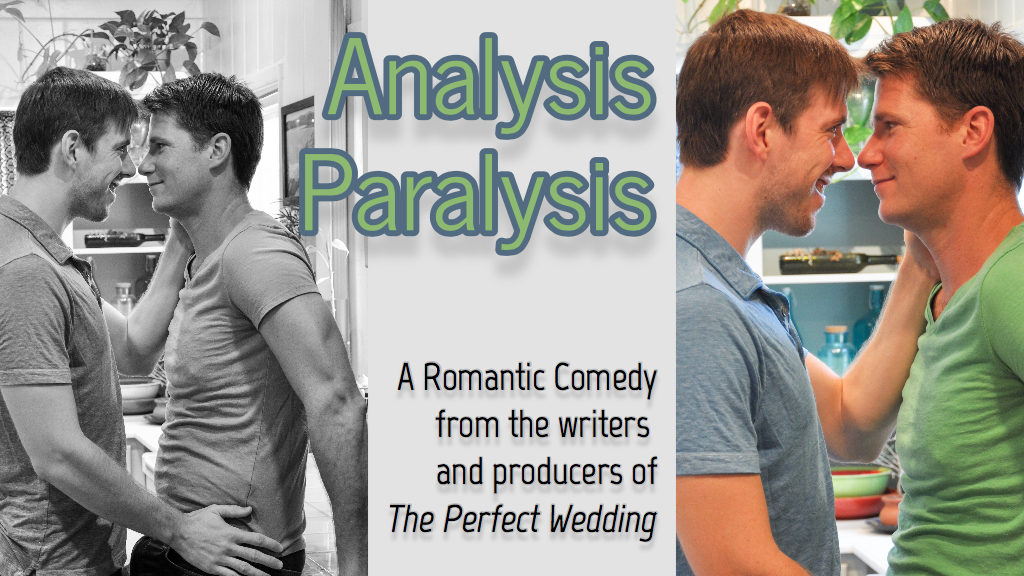 Why Kickstarter? Well, movies are mondo expensive to make. Crowd-funding sites like Kickstarter allow low-budget filmmakers to reach out and connect with our audience before filming starts, and establish a foundation of viewers who are willing to chip in—just a little—to make sure the film gets made.

People who contribute to the Kickstarter aren’t investors; they’re backers. And we don’t “sell” copies of the movie or other enticing items, we give those backers “rewards” for their financial support.

And we’ve got some fun rewards for Analysis Paralysis. The obvious one is a DVD of the finished film. (It’ll arrive in your mailbox anywhere from one to two years from now—that’s how long it can take to make a movie. Waving and saying another TY to the people who backed Russian Doll, who just recently received their DVD of the finally finished film…)

But one of the rewards we think will resonate with you, dear long-time-readers-of-my-romance-novels, is the chance to be a beta-reader for my next book. It doesn’t yet have a title, but as of right now, the book I’m writing is the next installment in my long-on-hold Tall, Dark & Dangerous series about Navy SEAL Team 10. (Remember them? Joe Cat? Lucky O’Donlon? Thomas King…)

This next book isn’t Tasha and Thomas King’s—but I am working toward telling their story in the very near future, I promise!

I hope you’ll check out the Kickstarter for Analysis Paralysis and find out a little bit about the movie, too. It’s a truly funny script and a great m/m romcom! Jason and his steadfast crew are filming in ten very busy days at the end of October. And I’m talking about the October that’s coming in just a few weeks, so yeah, it’s happening fast and soon.

And I know that most of you are readers and love books more than movies. But even if you don’t back the film, you can still help by spreading the word about our Kickstarter campaign via social media! (Thank you so very, very much!) 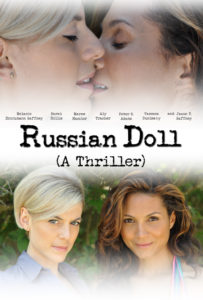 2) Sunday, September 17, at 5:45 pm, my production company’s latest LGBTQ movie, a thriller called Russian Doll will be shown at the Hanover Theater in Worcester, MA, as part of qFLIX, the Worcerter/New England LGBTQ film festival. For more information about the festival, the festival’s website is qFLIXWorcester.com

Note: there will be a Q&A with writer/director Ed Gaffney, local cast and crew, and me (executive producer Suz Brockmann) immediately after the screening!

For tickets to the movie (general admission = $10) go to https://tickets.thehanovertheatre.org/Online/article/qFlix

How about a female-driven, sexy, lesbian, edgy crime thriller—about, what else, but revenge? In a world where everyone has at least one secret, the heroine, an attractive, sexy blonde, still grief-stricken over the loss of her deceased partner, meets, during a crime investigation, an objection of her affection. The idea of having an attraction to another woman throws the smart cop into a feeling of unresolved guilt. While a young woman goes missing, their investigation leads them to the cast and crew of “The Russian Doll,” a production by a local play group. Little do the cops know that there’s a killer in their midst ready to avenge a 30-year-old crime. It’s a revenge drama. It’s a girl power movie. It’s a gal cop caper. There’s captives, blood, guts, romance, and crime gone crazy. What else do you need?

We invite civil and honest discussion on these topics and look forward to hearing a multitude of perspectives.”

Note: there are copies of Under Rose-Tainted Skies by Louise Gornall available at the library!

This month, we’re reading and discussing Under Rose-Tainted Skies by Louise Gornall

(Note from Suz: This is a fast-paced and wildly entertaining YA romance! Even if you can’t attend, it’s a really fun read, and the Kindle edition is really priced right!)

Summary of Under Rose-Tainted Skies:

Norah has agoraphobia and OCD. When groceries are left on the porch, she can’t step out to get them. Struggling to snag the bags with a stick, she meets Luke. He’s sweet and funny, and he just caught her fishing for groceries. Because of course he did. Norah can’t leave the house, but can she let someone in? As their friendship grows deeper, Norah realizes Luke deserves a normal girl. One who can lie on the front lawn and look up at the stars. One who isn’t so screwed up. Readers themselves will fall in love with Norah in this poignant, humorous, and deeply engaging portrait of a teen struggling to find the strength to face her demons.

P.S. If you’re okay with spoilers, you don’t have to read the book before the discussion! Come and hang out at one of the coolest little libraries in Massachusetts and maybe you’ll be inspired to read this really fun story! 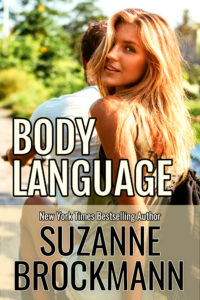 Body Language is a fun, short rom-com, originally published and set in 1998. The storyline is a combination of the friends-to-lovers as well as the Cinderella/Pygmalion make-over tropes. With the fairy godmother/Henry Higgins character as a long-haired, leather-pants wearing, motorcycle riding cameraman from New Jersey named Clint McCade…

And of course this book is also available in a (pricier!) paperback print-on-demand edition:

Next up to be reissued in October: Future Perfect, my very first romance novel, originally published in 1993! This reissue is gonna be an annotated edition! And, trust me, I’ve got a thing or two to comment on in those annotations!

Last but waaaay not least: My latest Troubleshooters novel, Some Kind of Hero, has a 4.6 out of a 5-star rating at Amazon! Yay! Thank you to all who have read and posted a review for this book! 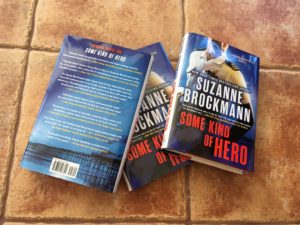 Some Kind of Hero Digital:

Some Kind of Hero Print:

Some Kind of Hero Audio:

As always, thank you so much for your time and attention!

Please feel free to email, blog, post, tweet, and/or share any or all of my news with your social circle! In fact, I appreciate it greatly when you do!

Thank you so much for your ongoing support!