Dropping another book out of the blue… 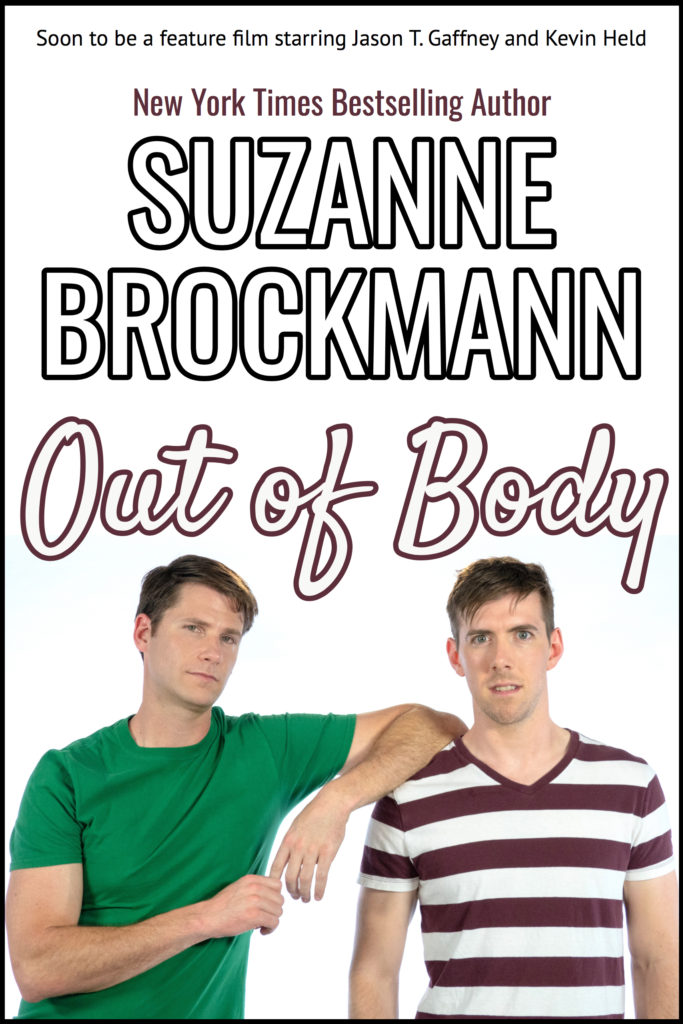 It might be Friday the 13th… but my latest full-length romance novel, Out of Body, is now available in e-book from Suzanne Brockmann Books!

Again, I hear your strangled and/or excited shouts of WTF (particularly those laced with panic from you, print-book lovers!) so let’s get you some info, ASAP:

Q: Will there be a print edition of Out of Body?

A: Yes! Out of Body will be available in a trade-size paperback via print-on-demand from CreateSpace, as well as a hardcover from Nook Press. Gimme another few weeks to get those print editions up and running. (Yes, I will email you again when they’re ready! And yes, one way or another, there’ll be an audio edition coming at ya soon, too!)

Q: Is this some ancient reissue or a short story or…?

A: Nope!This is a new, category-romance-length rom-com! It’s the novelization of the screenplay that we’re filming in September out in California. (And yeah, those are our two leading men, Jason and Kevin, on the cover of the book!) So this was actually a script first but not really, because when I wrote the screenplay, I was really writing the movie version of the romance novel that I saw in my head!! (We took that photo at a shoot out in LA just last Friday, on one of the hottest days on record!!)

Q: Wait, you just took that cover photo a week ago…?!

A: Yup. And I completed the book’s final revisions about 72 hours ago. That’s the magic of being an indie author who publishes her own work. As soon as the book’s edited and revised, I’m happy to drop it out there–boom!–so you can get it and read it ASAP. “Our” entire marketing strategy here at “Suzanne Brockmann Books” is based on the concept that readers will eventually stumble across a new book. Also…? Just as I make sure that my SBB-reissued older books are clearly marked with their original publication date, I’ll include “First published July 2018” in the book’s description, wherever Out of Body is sold. So if you miss a newsletter or two, and you stumble across a book you don’t recognize, you’ll know at a glance if it’s brand spanking new! (As this one is!)

Q: Are you really making a movie of Out of Body?

A: Yes, and thank you for asking! We’re filming in September, with hopes of having the movie edited and ready to watch in early 2019. Just as we did with Analysis Paralysis, our latest rom-com feature, we’ll be Kickstarting Out of Body this August. So if you want to help crowd-fund LGBTQ movies and get super-cool unique “rewards” for being a “backer,” (and make this particular story come to life on the screen!), make sure you follow me on Kickstarter or open the email newsletters (like this one) coming at you in the next few weeks! I always offer a very popular “be a beta-reader” reward via Kickstarter, where you can back our movie and get a chance to read an early draft of my next book–in this case it’s gonna be TDD #13, Thomas and Tasha’s book! (I did the photo shoot for that book’s cover while I was in LA, too…)

Here’s the blurb of Out of Body that I promised you above:

Friends to lovers, with a supernatural twist…

Henry’s been in love with his best friend Malcolm since college, but after he kisses Mal on Halloween night, things go desperately wrong. Awkward turns to just plain weird when Mal mysteriously vanishes.

And weird gets freaky when Henry starts to wonder if he’s being haunted by Mal’s ghost.

Henry’s other friends think he’s losing it—that Mal’s just run from conflict. But freaky turns to full-on crazy when, with the help of a “spirit guide,” Henry casts a spell that allows him—and only him—to see and hear Malcolm, who’s been right there, in his house, the entire time.

If Mal really is a “lingering spirit,” he won’t “move on” until he completes some undetermined “unfinished business.” And Mal—who’s been in love with Henry since forever, too—assumes his task is to help his best friend woo and fall in love with another man.

But sometimes things aren’t what they seem, being invisible doesn’t always mean you’re dead, and love really can conquer all…

Suzanne Brockmann is back with a stand-alone romantic comedy that’s soon to be a feature film starring Jason T. Gaffney and Kevin Held. (50,000 words or 190 pages)

P.S. Yeah, there are “supernatural” elements to this story, but it’s mostly light-hearted and humorous–kind of Buffy-esque in its irreverence and silliness! I hope you’ll give it a try, because I really, really, REALLY loved writing Henry and Mal’s story!

One last thing!I’m going to Denver for the Romance Writers of America national conference, so I’ll be signing books at the RWA Big-Ass Literacy Signing(along with hundreds of other authors!! And no, it’s not officially called that, but wait’ll you see how many authors are in one room! Your head will explode with joy!!) on Saturday, July 21st from 3 – 5 p.m. at the Sheraton Denver Downtown Hotel, in the Plaza Ballroom (Plaza building, Concourse level)  If you’re in the area, put this event on your calendar and be sure to drop by to say hello!

Note: this is a signing where ALL proceeds fund literacy programs, so there are rules about not bringing in books from home. (Check that link above.) I’ll be sitting at my own special “Just won RWA’s Lifetime Achievement Award” table (yay!), and I’ll have copies of SOME KIND OF HERO and DO OR DIE (generously donated by Penguin Random House!!) to sign, plus lotsa postcards for Analysis Paralysis, PLUS Jason’s gonna be there, too! (Meet one of my favorite movie stars!!)

Okay, that’s all the news for now!

As always, thank you so much for your time and attention!

Please feel free to email, blog, post, tweet, and/or share any or all of my news with your social circle! I appreciate it greatly when you do!

Thank you so much for your ongoing support!

Hang in there, double-check your voter registration, and happy summer!