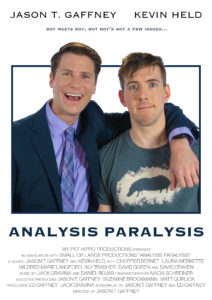 Available now as a rental and download purchase via:

Analysis Paralysis is an LGBTQ romantic comedy about the intersection of imagination and anxiety, and the courage to reach for love.

The story begins when Tyler O’Conner, a young gay author, visits a therapist and discovers that he suffers from an anxiety disorder commonly called “Analysis Paralysis” — an inability to take action without imagining the ways that each possible choice could go wrong. The problem is that, unchecked, the condition will lead Tyler into a state of complete inaction.

To confront the disorder, Tyler decides to fight through his anxiety and ask his cute neighbor, Shane, out for coffee. Despite a flurry of imagined disasters, the date goes well, and Shane and Tyler ultimately become involved.

Against all odds, the relationship moves forward, but not without every step of the way — sex, moving in together, and meeting Shane’s parents — preceded by an avalanche of negative, albeit hilarious, fantasies.

Finally, convinced that Shane is leaving as a result of an uncomfortable interaction with Shane’s mom and dad, Tyler steels himself for what he sees as the inevitable rejection. But Shane has other plans…

Cool things I want you to know about ANALYSIS PARALYSIS: