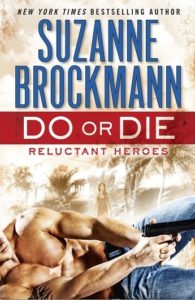 DO OR DIE, the first book in my new “Reluctant Heroes” romantic suspense series, set in my Troubleshooters world, is in bookstores today!

Rogue former SEAL Ian Dunn is in the middle of an 18-month jail sentence when he’s approached by the FBI to lead a covert mission to rescue a pair of very important kidnapped kids. When he flatly turns down their Get Out of Jail Free card, choosing instead to stay incarcerated, lawyer Phoebe Kruger figures something’s up, but even she has no idea of the velocity of the crap that’s about to hit the fan when Ian’s unwillingly released into the FBI’s hands.  Phoebe’s also aware that a SEAL usually works with a team — so where and who are Ian’s teammates . . . ?

Publisher’s Weekly says:  “(Do or Die) …moves powerfully once it gets in gear, and the cast of sensitive alpha men and strong, imperfect women is well developed. Interpersonal tension gets far more focus than action, creating a refreshingly light feel.”

Kirkus says:  “Brockmann effortlessly and expertly tosses hundreds of details into the air and juggles them with brilliance. The first in her Reluctant Heroes series, the novel will captivate readers with its intense, action-filled plot, alpha-and-a-half hero, and his smart, perfect-for-him heroine, as well as secondary characters who contribute pathos and humor.  Enthralling and breathtaking.” (starred review)

Booklist says:  “Brockmann leaves the reader breathless, and longing for sequels. The sex is great, the action nonstop; and the dialogue between Ian and Phoebe is some of Rita Award–winning Brockmann’s best. Her fans will cheer, as will all military-romance fans.” (starred review)

Heroes & Heartbreakers says:  “If you’re already a Brockmann fan, you’ll love each new obstacle that is flung up in front of Ian, Phoebe, and their crew, and you’ll be looking forward to what happens next with all the secondary characters. If you’ve wanted to try Brockmann’s work, but have been worried by the huge number of Troubleshooters books, Do or Die might be a good place to start.”

The Book Gourmet says:  “This was a masterpiece of humongous proportions. I loved it from beginning to end. … This book was an impeccable blend of character-driven story, action, drama, well-placed angst, romance, and (sometimes snarky) humor.”

Here are the deets:

Another Note: Never been to one of my booksignings?  Find out what it’s like here.

See my full schedule of events and appearances!

Audiobook aficionados! AudioGals is having a four-day event on their website, featuring my audiobooks and my favorite audiobook narrators Patrick Lawlor and Melanie Ewbank.  There’s an audio interview with the three of us (Part One is here and Part Two is here!), and on Wednesday all three of us will be dropping by the AudioGals site to answer questions and comments!)

If you’re a fan of audiobooks, go check it out!  And if you’ve never listened to one of my audiobooks before, there’s a sample of DO OR DIE (read by both Patrick and Melanie) up at AudioGals — it’s worth checking out at www.AudioGals.net.

Last but not least, later today I’ll be creating a page on my blog for readers to discuss DO OR DIE.  Warning: It is a ***SPOILER’S WELCOME*** zone!  🙂  So do drop by, but only after you’ve finished the book!