Read the dedication to Jason

New York Times bestselling author Suzanne Brockmann knows exactly what makes hearts race and pulses pound: peril and passion. No one succeeds more brilliantly at blending these exhilarating elements in breathtaking novels of men and women forced to grapple with the deepest emotions and the highest risks. And there’s no better proof than her new novel of suspense: Hot Target aims to thrill on every level…

Like most men of action, Navy SEAL Chief Cosmo Richter never learned how to take a vacation. So when he finds himself facing a month’s leave with little to do, he offers his services to Troubleshooters Incorporated. Founded by a former SEAL, the private-sector security firm is a major player in the ongoing war against terrorism, known for carrying out covert missions too volatile for official U.S. military action. But the first case Richter takes on is anything but under the radar.

High-profile maverick movie producer Jane Mercedes Chadwick hasn’t quite completed her newest film, but she’s already courting controversy. The World War II epic frankly portrays the homosexuality of a real-life hero — and the storm of advance media buzz surrounding it has drawn the fury of extremist groups, including the neo-nazi Freedom Network. But despite a relentless campaign of angry e-mails, phone calls, and smear tactics, Chadwick won’t be pressured into abandoning the project. Then the harassment turns to death threats. The FBI gets involved, her nervous Hollywood associates call in Troubleshooters, and now Jan has an army of round-the-clock bodyguards, whether she likes it or not. And she definitely doesn’t.

Jane’s stubbornness is yet another emotional obstacle that FBI agent Jules Cassidy doesn’t need — he’s already in the midst of a personal tug-of-war with his ex-lover, while fighting a growing attraction to Jane’s brother.

Determined to succeed — and survive — on her own terms, Jane doesn’t expect the bond she forms with the quiet, capable Cosmo Richter. Yet even as their feelings draw them closer, the noose of deadly terror all around them draws tighter. And when all hell erupts desire and desperate choices will collide on a killing ground that may trap them both in the crossfire. 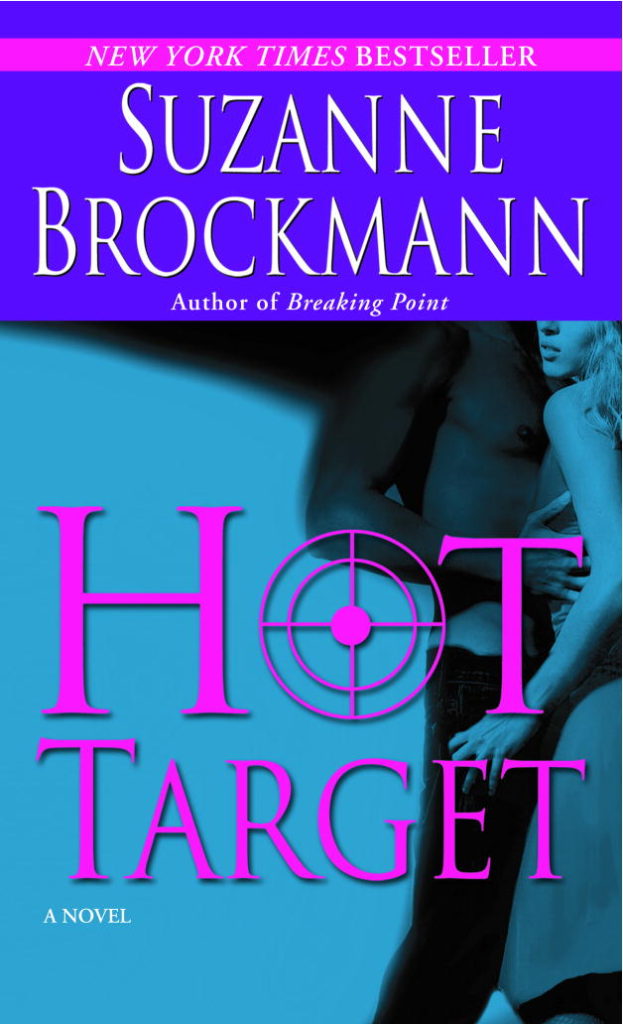 From Romantic Times Magazine:
Four and 1/2 stars and a Top Pick! “When his mother is injured in an accident, Navy SEAL Chief Cosmo Richter takes leave to be with her. But since she tends to drive him nuts, Cosmo also agrees to take a side job with Tom Paoletti’s Troubleshooters, Inc.

Working on a biopic about a gay World War II hero, Hollywood writer and producer Jane Mercedes Chadwick is harassed by an extremist neo-Nazi group called the Freedom Network. When the harassment turns to death threats, the studio hires Troubleshooters.

The violent emails Jane receives match those sent to a recently murdered assistant district attorney. At first, taciturn Cosmo and extroverted Jane butt heads, but they soon realize that each uses a facade to protect their true selves.

The importance of both freedom and tolerance are the underlying messages in Brockmann’s latest intense thriller. Popular gay character Jules gets his chance at a possible new love interest while also being forced to confront heartache from the past. Hot Target is an emotional banquet served with lots of taut adventure.” — Jill M. Smith

“I must confess I was a little -hesitant- about a gay love story (I dunno why – I read Mercedes Lackey, after all!) — but you did a perfect job of moving our hearts … and our beloved characters’… to where they needed to be. You’ve given us a wonderful bunch of people — heroes, heroines, and villains — who deserve to be widely-known and enjoyed by millions of readers.” — Merry Cutler, Bookseller

“Suspense propels this novel into constant motion, finding the reader immersed from page one. Fans and newcomers alike can eagerly anticipate Max and Gina’s story, the next installment in this series that sizzles with romance even as it pays homage to our nation’s heroes.” — Sheri Melnick Read the whole review at: http://thebestreviews.com/review26071

“HOT TARGET is a well-written, emotional yet funny, compelling, and highly entertaining novel. In short, typical Brockmann. But it’s not typical, because much of the story also involves a secondary but equally important story about FBI agent Jules Cassidy, who is gay, and his attraction to Jane’s brother Robin. This relationship is explored as fully as the relationship between Cosmo and Jane, and it is equally interesting, riveting and fascinating.

In fact, that is one of the reasons that I particularly liked HOT TARGET, and am happy to nominate it for a Perfect 10. It delves into issues that some romance authors may find too risky, but it does so with class and without the typical stereotypes, and I became as emotionally involved in what was happening to Jules as I was in Cosmo and Jane’s story. Which, by the way, I totally loved. Cosmo was always the strong, silent type in the previous SEAL novels, and I was just dying to have Ms. Brockmann devote an entire novel to him. I couldn’t imagine his type of woman, but I knew there were untapped depths to him. Little did I know Jane was waiting in the wings; she’s brash, funny, caring, and just perfect for Cosmo. You’ll excuse me if I speak of these characters as if I know them, but I do know them.

HOT TARGET is a great story, with all the romance and laughs I so appreciate in Suzanne Brockmann’s books. I expected nothing less. I highly recommend HOT TARGET and hope you find it as entertaining as I did.” — Astrid Kinn, Romance Reviews Today

“This book is the latest installment in the eagerly awaited stories about Troubleshooter’s Incorporated and Seal Team Sixteen. While many of the characters in this book were first introduced in previous books, HOT TARGET is a stand alone novel…

Brockmann’s story development, her revelation of interesting tidbits of information about her characters, and her plot twists are always fun to read. This book offers up details about Cosmo that are fascinating, given that he has generally been a silent character in previous books. Cosmo develops into a multi-faceted person in this book…

Suzanne Brockmann is very open in her dedication, in her website, and in the book itself, about her wish to write a novel portraying homosexual relationships. I think she took a major risk with her open portrayal of gay characters in HOT TARGET and I think she succeeded in pitching her message “just right”, i.e., not too political, not too graphic, and realistically believable. She beautifully captures the gamut of individuals very comfortable with their homosexuality to individuals struggling with acknowledging this self-truth…

It is a mark of Brockmann’s popularity that she can write and publish this type of mainstream romance novel with such a realistic message about homosexuality. Her message? Gay people are not that much different from anyone else.” –Reviewed by: Jeri Neal, Rating: 4 plugs, The Romance Reader’s Connection

When does truth tarnish an American hero? Suzanne Brockmann’s sizzling new suspense novel, Hot Target, focuses on two of today’s most incendiary topics—gays and the extremists who love to hate them. Movie producer Jane Chadwick’s plan to film the biography of World War II hero Hal Lord means outing him, and that’s more than the rabid members of the Freedom Network will tolerate. Death threats spook Heartbeat Studios enough to bring in a team of bodyguards, including Navy SEAL Cosmo Richter, and FBI agent Jules Cassidy. Jane singles Cosmo out to foster her own façade as a Hollywood hottie, but soon finds he’s more than arm candy. Jane’s brother, Robin, is the womanizing actor chosen to play Hal, a career-making role. His “research” forces him to confront the self-denials driving his dissolute lifestyle. This fast-paced, sensuous and provocative novel proves that all relationships contain virtually the same nuances, angst and joys. Brockmann takes aim at stereotypes, fears and ignorance with the heart of a warrior-writer and ably proves the pen is indeed mightier. Brava, Brockmann. — BookPage Reviews