Robin wasn’t sure exactly what he’d expected, but it sure as hell wasn’t a four door family sedan.

The FBI agent was also shorter and younger than he’d imagined, getting out of the car as Robin approached the gate. Compact, with a trim build, he had dark hair that he wore cut short and a face that could have appeared next to Robin’s on the cover of Tiger Beat magazine.

He could just imagine this guy’s meeting with his high school guidance counselor. “You could be a model, or a TV star — you don’t really need any acting skills for that — or… Oh, here’s something just perfect! *NSYNC is looking for new blood…” “Well, you see, Mrs. Smersh, I hate to disappoint you, but I really have my heart set on becoming an FBI agent…”

“Sorry,” Robin called as he came the last few feet down the drive. “It sticks sometimes.”

The gate actually stuck most of the time, and they’d gotten into the habit of leaving it open. But Jane had wanted it closed today — probably to fool the private security team into thinking she was taking precautions with her safety.

It took him four tries to get the damn thing to work. His smile definitely felt strained around the edges by the time it finally opened.

Now that they were both on the same side of the fence, the agent flashed his badge as he held out his hand. “Jules Cassidy, FBI.”

“Screen Actors Guild,” Robin explained. “Sorry, I have this inability to not be an asshole, especially when I’m not provoked.”

The double negatives didn’t stop Jules for even a second, and he laughed, taking off his sunglasses and…

Hello. Big eye contact. The FBI guy not only was shorter and younger, but he was also gayer than Robin had expected.

Ever since he’d gone blond to play Hal Lord in American Hero, he’d been hit on by gay men more times than he could count. It had been a little nerve-wracking at first, but he’d learned to remove any potential mystery as quickly as possible.

“Not gay,” Robin said now. He thought of sweet little Patty up in Jane’s office, who’d given him that shy smile when he’d emerged from the meeting. He knew without a doubt that he’d be welcome should he come a-calling at her apartment later this evening. Yes, he knew he’d promised his sister that he’d be good, but Patty was so cute… “Don’t waste your energy.”

“Assume everything,” Robin told him cheerfully. “That’s my motto. It keeps me out of trouble.”

“I would think it might get you into it,” Jules countered.

“And still you flirt with me, you devil. What part of ‘Not gay,’ did you not understand? Drive through, will you, so I can try to close this behind you.”

Jules Cassidy, FBI, was still laughing — and he was pretty damn adorable when he laughed. Harve and Guillermo and Gary the Grip and even Ricco, who was in a long term relationship, were going to swoon when they met him. He got back into the Sable and drove through the gate. He stopped just on the other side, though.

Robin gave up on the idea of closing the gate after his fifth try.

“I hate that motherfucking thing,” he said, adding as he realized Jules had rolled his window down, “There, does that convince you? A very heterosexual use of the manly verb to motherfuck, positioned in my sentence as a salty adverb.”

“Salty adjective,” Jules corrected him. “If it were an adverb it would be motherfuckingly.”

“Whatever. My sister’s the writer in the family,” Robin told him. “Which is why she’s the one getting the death threats — which she’s not taking at all seriously. Tell me the truth, Jules Cassidy, FBI. Do we really have something to worry about here?”

The FBI agent got real serious, real fast, morphing from happy, flirty gay boy into completely grown-up hard-ass with a nearly palpable sense of purpose and a determination that matched his set of giant steel balls. Holy macaroni, Mrs. Smersh. Wherever did you get the idea that Jules Cassidy couldn’t act?

“Yes,” Jules told him. “You do. Have you ever heard of the Freedom Network?”

It was very clear to Cosmo that J. Mercedes Chadwick couldn’t believe what she was hearing.

“You’re telling me,” she repeated, making sure that she got it right, “that there are thousands of people — tens of thousands…? — who consider Chester Lord — a little known Alabama District Court Judge who’s been dead since 1959 — their personal hero?”

“This is a man who was uber-conservative even for his time,” she pointed out. “There are rumors that Judge Lord looked the other way and allowed lynchings–”

“I believe they refer to him as honest and old-fashioned,” Jules told her. “And his son Hal was a highly-decorated war hero — you surely know more about that part of it than I do. But I can tell you one thing — apparently these people are very protective of the memories of both father and son, and they’re not at all happy at the idea of you outing Hal in your movie.”

Mercedes’ assistant Patty had put a copy of the American Hero script onto the table in front of them, along with the warning that they could not take it out of this building.

Like… what? They were going to sell it on e-bay? Or give a copy of the most provocative scenes to a tabloid like the National Voice?

Cosmo flipped through it. It was the story of Jack Shelton and Harold “Hal” Lord — two young American soldiers who met in Paris in early 1945, toward the end of World War Two.

Hal was a highly decorated war hero, and because he spoke fluent German, he volunteered to be part of an Allied team determined to find out whether Hitler’s scientists had succeeded in creating an atomic bomb. The movie alleged that Hal Lord was gay, but in total denial. He was not just in the closet, but he was sitting so far in the back with his eyes shut, he couldn’t even see the door.

Until Jack Shelton made the scene.

“Hal’s own granddaughter has given our movie her blessing,” Mercedes pointed out. “If you’re looking for the sex, the first gay love scene isn’t until page seventy-two.”

Cos looked up, directly into her eyes, which were a remarkably pretty color. She was talking to him. She thought he was looking for…

“The hetero couple doesn’t get it on until close to the end of the movie either– page seventy-nine,” she continued. “I think you’ll find it’s all tastefully done. We fade to black in both of the romantic subplots. We’ve been very up front about that, so I’m not sure why all those internet crazies have their panties in a twist.”

“I wasn’t…” he started to say, but her attention was already back on Cassidy. Fine. Let her think whatever she wanted to think.

“Can we back up a bit?” Mercedes asked. “You said earlier that these Freedom people — all mega-thousands of them — have these weekend get-togethers up in… in… Monkey-Fuck, Idaho where they sit around a campfire, doing what? Reciting eighty-seven verse epic poems lauding the glory that was Chester ‘Baby-Lyncher’ Lord?”

“Well, we’re not exactly sure what they do during their retreats,” Jules told her. He was trying to keep this serious, but Cosmo could tell that Monkey-Fuck had him biting the insides of his cheeks. “They’re pretty adamant about not letting outsiders into their inner circle. Still, whatever they do up there, we think it’s probably more likely that it has to do with firearms rather than poetry.”

“But whatever they’re doing, they’re doing it in Idaho, right?” she asked. “So I should be okay as long as I stay in California.” She looked over at her assistant. “Patty, call Steve Spielberg with my regrets. I won’t be able to attend his potato-picking party in Boise next week, gosh darn it.”

Jules was hanging in. “Ms. Chadwick. With all due respect, yesterday this was a joke. But today the Freedom Network’s involved. There have been several emails that have raised a red flag. I don’t have the details yet, but my boss, Max Bhagat, is concerned. And believe me, when he becomes concerned, you should take it seriously.”

Mercedes looked again at the computer documents Jules had given her — pages upon pages, printed directly from the Freedom Network’s website. They included a sheet upon which was printed a picture of her face in the center of a bulls-eye target.

She laughed, but to Cosmo’s ears it sounded a little forced. “This is priceless, you know. I couldn’t buy this kind of publicity.”

Her brother spoke, his voice sharp. “I think we’ve all agreed this has gone too far, Jane.”

Mercedes — or Jane, as her brother called her — looked up at Cosmo, as if she’d somehow decided that she trusted him above everyone else in the room. “Am I really in danger?” she asked him.

He put down the script. Not from him. Nothing moved him less than a woman like J. Mercedes Chadwick. Yes, she was beautiful, with a perfect oval of a face that hinted at a Middle Eastern ancestry. And that body…

He cleared his throat. “Lotta crazy people out there,” he told her. She seemed to want more, so he kept going. “Seems like a no-brainer to me — letting us come in and provide security, with HeartBeat paying for it.”

She looked down at that picture again, frowning slightly. And Cosmo suspected that it scared her more than she was willing to admit.

But she kept up her act. “They spelled my name wrong,” she said.

“Yeah, but they got our address right,” the brother pointed out.

There was silence then, as that bit of info sank in.

J. Mercedes finally sighed, swearing under her breath. Then she looked up, again directly at Cosmo. “How do we do this bodyguard thing?” she asked him. “How, exactly, is this going to work?” 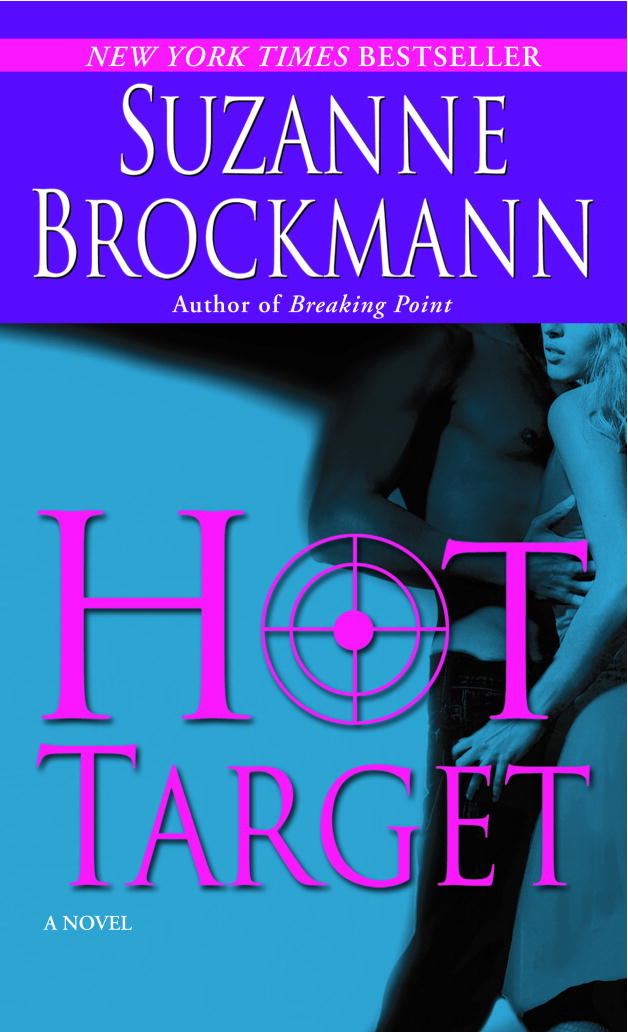