Navy SEAL Lucky O’Donlon was the original love-’em-and-leave-’em guy used to women swooning at his feet. So how could it be that the frustratingly attractive journalist Sydney Jameson had nothing to offer him but one very cold shoulder? Well, two could play that game. But first things first—he and Sydney had a job to do. They had to get their man. Then there would be time enough for him to get his woman…. 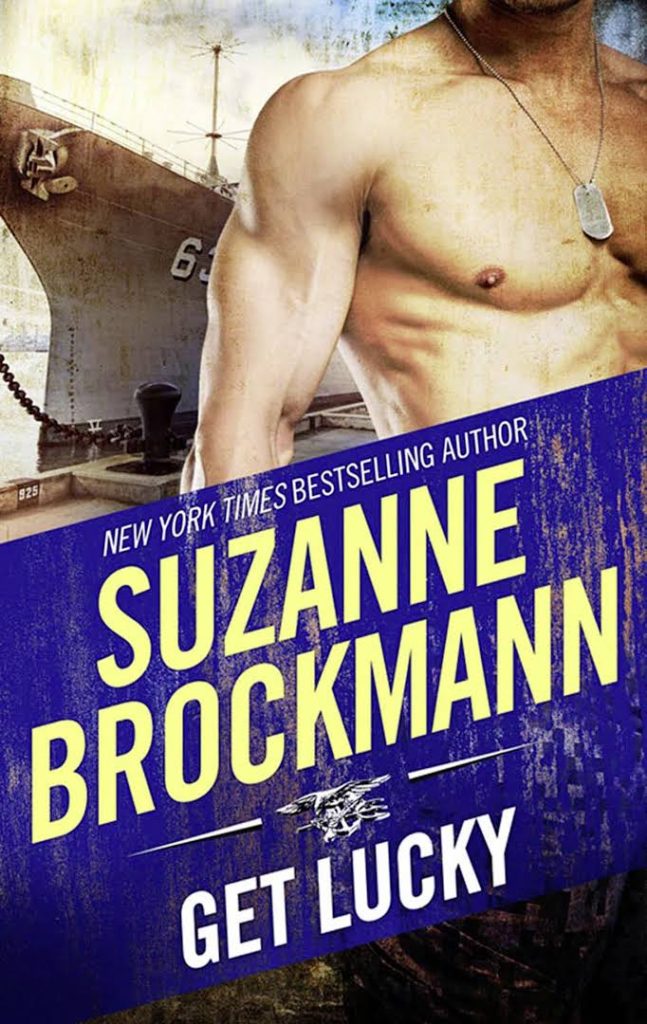 “Suzanne Brockmann knocks our socks off once again in GET LUCKY as SEAL Team Ten’s Alpha Squad mobilizes with Lucky in charge to catch a serial rapist who marks his victims with a distinctive SEAL emblem. To the handsome officer’s dismay, he is saddled with an intrepid reporter who makes mincemeat of his dedication to bachelorhood. The adventure is breathtaking, the romance sizzling and the emotional intensity spectacular.” 4 and 1/2 stars, WISH Award and RT Top Pick. Melinda Helfer, Romantic Times

Note From Suz: I’d been hearing about it for years. Fans of my “Tall, Dark & Dangerous” series about U.S. Navy SEALs wanted me to tell Lucky’s story.

Luke “Lucky” O’Donlon first appeared in FRISCO’S KID — a gleaming, golden, motorcycle-riding ladies’ man who didn’t hesitate to give Mia, his best friend’s love interest, a thorough once-over. Sure, he backed down when Frisco warned him off, but not until he made it obvious that he was interested, too!

He showed up again in EVERYDAY, AVERAGE JONES, as part of the cheerleading squad ready to celebrate when Cowboy Jones announced that he wasn’t going to be forced into a shotgun wedding, that the pregnant heroine had turned his marriage proposal down. Completely clueless to the fact that Jones wanted to marry this woman, Lucky said exactly the wrong thing, resulting in angry words and a fist fight that had to be broken up by the Senior Chief.

In HARVARD’S EDUCATION, Lucky broke his pattern of dating nineteen-year-old beauty pageant winners by hitting on FInCOM Agent PJ Richards. But she saw right through him — as did many readers. Blinded by physical beauty, commitment-shy, never serious — I received dozens of letters from gleeful readers telling me they couldn’t wait until Lucky “got his.”

And she’s completely scornful of Lt. “Lucky” O’Donlon, a man she thinks is as plastic as a Ken doll!

But the pair are forced to work together when a serial rapist terrorizes the towns surrounding the SEAL training facility.

When the dust settles, Lucky most definitely gets his. And Syd…well, let’s just say that she gets very, very lucky!