Florida private investigator and ex-cop Ric Alvarado’s life is spiraling out of control. His beautiful new Girl Friday, Annie Dugan, is far more interested in fieldwork than filing, and despite Ric’s best efforts to ignore the attraction, sparks are flying between them. Then one of Ric’s clients turns femme fatale and tries to gun down an innocent man. Thanks to quick thinking and even quicker reflexes, Ric comes to the rescue, only to learn he’s done a very good deed for some very bad people.

FBI Agent Jules Cassidy’s life isn’t in much better shape. For years the FBI has been trying to prove Gordon Burns’s ties to terrorist activity. Now, thanks to Ric and Annie, Jules has found a way into the lion’s den. But in the course of his investigation, he comes face to face with Robin Chadwick, the charismatic but self-destructive and closeted movie star for whom Jules feels a powerful attraction. Robin’s in town promoting his latest film — and Gordon Burns is a star-struck movie buff.

With Robin and Jules’s help, Ric and Annie are soon entrenched in Burns’s organization, surrounded by killers who may already have executed an FBI infiltrator. Before long the couple realizes that many more lives than their own will be at stake if they make a false move. As the heat between them reaches dangerous levels, so do the risks they’re willing to take — in the line of duty, for the sake of loyalty, and in the name of something that runs even deeper… 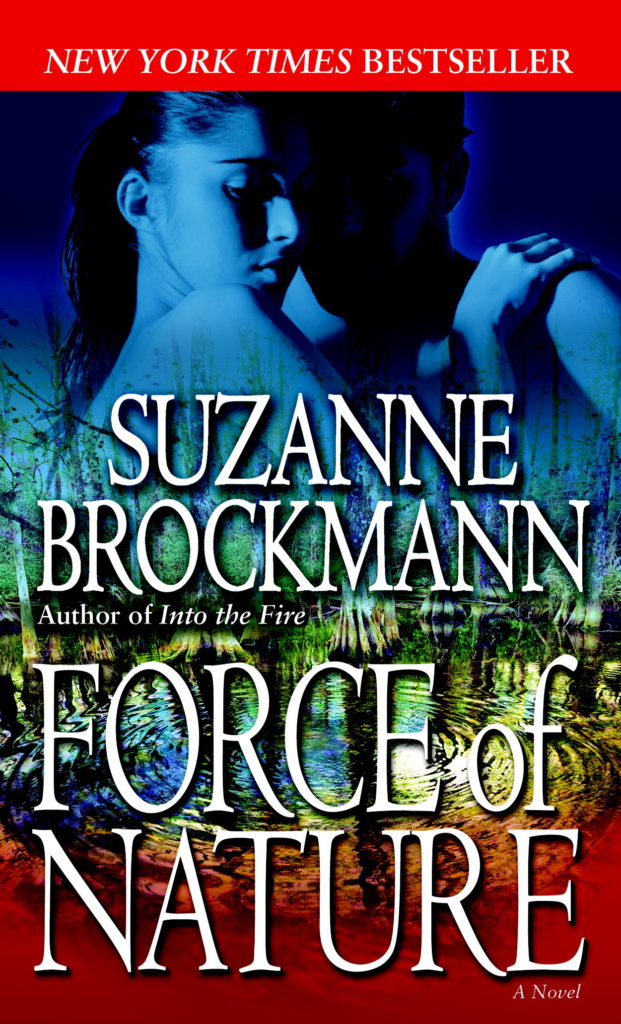 Here’s something I wrote after I sent out copies of FORCE OF NATURE to some friends. Be warned — it contains spoiler info about the book, along with some non-spoiler info about ALL THROUGH THE NIGHT, the holiday “novella.”

To start this off, I have to give you that classic comment “So THAT happened!”

Truly, it was not my intention for Jules to find his happy ending in FON. In fact, I’d been planning for a very long time to give Jules a book of his very own. When I first outline FON, I intended the book to be merely another installment in the Jules/Robin story arc. In that outline version, the book ended with Robin going into rehab, unable to give up his career for Jules, and with Jules unable to compromise to be in a relationship with Robin.

So what happened? I so rarely deviate from my outlines — and never in such a major way as this. It was perplexing!

Here’s how it went down: I’m writing the book, and everything’s going along according to plan, and I get to the scene where Jules goes to Robin’s hotel room — where he and Robin come face to face for the first time in two years.

Wow, that was strange to write. The entire scene quickly slipped out of my control. Jules was SO uncomfortable, and Robin… Sheesh. I nearly had to hit Robin with a stick, just to keep him from just surrendering, right then and there. I was really surprised by how much Robin wanted Jules (in every possible way) — just after seeing him for the first time again.

We had a little character/author conference that went something like this:

So that wasn’t very productive. It was then that I pulled Jules aside.

Me: Look, Robin’s got some serious issues, and I know that you are very clear about what you’re looking for in a partner–
Jules: Yeah, I don’t care about that anymore.
Me: Oh, come on. If you were looking to be in a relationship with someone who’s in the closet, you would’ve hooked up with Ben for more than just a week.
Jules: I didn’t love Ben. I tried, but… I know you’re disappointed in me, but I’m completely in love with Robin. So much so that I’m willing to compromise.
Me: Jules, come on.
Jules: (very annoyed) Suz. I’m serious. Sorry to screw up your multi-book story arc plan, but, God. Why did you make me stay away from him for all that time, anyway? Don’t answer that. I’m too mad at you to talk. Don’t you dare kill me off in this book.

(And yeah, he wouldn’t talk to me when he thought I’d gone and killed off Robin…)

It was a mutiny. Unlike anything I’ve experienced ever before. Closest was Gina, who refused to die and then pointed to Max and said “I want him,” despite their age difference.

But even with Gina, I still had some amount of control.

When I got to the Jules/Robin love scene in the limo (in my original outline, I wasn’t sure if I was going to have their relationship turn physical at that point — I kind of left it open, it could have gone either way — or at least it would have if I had been in control of the characters), I wrote the scene and then I actually put on the brakes. I stopped writing for about a week and a half.

I spent the first half of those days just sitting in the lanai, in the sun, and thinking. And negotiating with Robin. Really it was Robin who was the driving force behind the outcome of their story arc. I think I might’ve been able to mind-control Jules, but Robin was unswerving in his conviction. So for days, he sat on that porch with me, and every time I said, “What if–” He wouldn’t even let me finish. “No.” “How about–” “No.”

And then, after about four days of this, he looked at me and he said, “You know how I said I wanted it all?” I nodded. And he said, “I’ve redefined all. To me, all is Jules.”

And then, over the next five days, I completely re-outlined the entire second half of the book. I literally sat there, and made a list of every single scene in the book from that point on — telling the story that Robin and Jules wanted me to tell. And then I started writing, and I pretty much didn’t stop until the book was done.

Until Jules and Robin were both happy.

So that’s what happened.

I have to admit that I’m bracing for some complaints from readers — the first having to do with the non-graphic nature of the Jules/Robin love scene.

I really struggled with the best way to write this scene, because to me it does seem unbalanced — to have the Ric/Annie love scenes be so graphic, but then to leave so much to the imagination in the limo with Robin and Jules.

But my message — love is love is love — is so important, I just couldn’t bear the thought of frightening away a more timid readership by putting in too much man-on-man action. And I believe that the truth is — at least my truth — that making love is about emotions. I felt the most important part of the Robin/Jules love scene was how Jules felt when Robin confessed that he loved him.

And I purposely set the scene in a “one-nighter” type setting. Slightly skeevy — a limo, yeesh. Jules is trying so hard not to admit that his heart is in jeopardy. He’s trying to fool himself, and yet, (I hope!) that his tenderness towards Robin (and Robin’s tender feelings for Jules) shines through.

I actually gave some thought to toning down the hetero love scenes in this book for balance, but then I thought, Nah.

So okay. I think that there will be people who protest the fact that Jules and Robin don’t get a “he put his hand there, he put his mouth there,” type love scene. So be it.

Just as I think there will be people who protest that Jules doesn’t get to be the hero of his own book. That was a hard one for me, since it was part of my plan to write a mainstream romance novel with Jules and Robin as the main characters. (And yes, it was always going to be Robin, right from the start. I introduced Ben as the man Jules should have loved — if one could only make logical choices about matters of the heart. I also knew back when I first introduced Ben, that I was going to have him die in Iraq. It’s too easy for Americans to forget that our soldiers are dying in Iraq. I also wanted to reveal how terrible it can be with “don’t ask, don’t tell,” to be gay and in the military. You live with knowing that if you die, it’s possible that your partner will never be told.)

When I was writing the last half of FON, when I knew that Jules was indeed going to get his happy ending here, I was really kinda bummed out that he wasn’t going to get his own book. It was then that I came up with the idea of a Christmas novella. And yes, it’s Jules and Robin who are getting married in JOYFUL TIDINGS, which will hit book stores on October 30th, a mere two and a half months after FON. (My original title for the novella was JOYFUL NOISE, but the publisher didn’t like it. Sheesh.) (AND NOTE: we’ve since changed the title to ALL THROUGH THE NIGHT.)

Jules and Robin are the main characters of the novella — which also features Sam and Alyssa, a little bit of Max and Gina, some Molly and Jones, an appearance from Cosmo and Jane (and Cos’s mom), and some other fun cameos, too, from the gang at Troubleshooters, Inc., SEAL Team Sixteen, and Max’s FBI team. There’s a brand new romance between Robin’s personal assistant, Dolphina, and a certain Boston Globe reporter that you’ve met before.

Just to give you a brief overview, Robin gets a job in a pay-cable TV series (think Six Feet Under or Sex and the City) that’s being filmed in Boston. Jules takes a temporary transfer up there to be with him, and they realize that, since they’re living in Massachusetts, they can actually get legally married. So that’s the frame of ALL THROUGH THE NIGHT. Hijinx, of course, ensue.

I thought the novella might be an acceptable alternative for those readers who are disappointed that Jules didn’t get his own book. I’m hoping it will also please those readers who always write to ask me why I never include any weddings in my books. Uh, Tom and Kelly? Don’t they count? I guess my answer is that I’ll include a wedding if it adds to the conflict, or if I think it’s unique and/or interesting. And frankly, I want to write about Jules and Robin’s wedding precisely because it’s NOT unique. It’s just like a regular wedding — it’s a ceremony between two people who love each other and want to spend their lives together.

So that’s what happened with FORCE OF NATURE. The one character I couldn’t mind control or bend to my will was Robin. Go figure.