Harvard glanced at the three FInCOM agents sitting at the bar again. Still no sign of PJ. “Has anyone tried to make friends with the Finks tonight?”

“Besides you trying to get close to PJ Richards, you mean? Trying to hold her hand out in the woods?” Wes Skelly laughed at his own miserable joke. “Jeez, Senior Chief, only time in my memory that you were the first man down in a paintball fight.”

“That was my paintball that hit you, H.,” Lucky drawled. “I hope it didn’t hurt too badly.”

“Hey, it’s about time he found out what it feels like just being hit,” Bobby countered in his sub-bass-woofer voice.

“I couldn’t resist,” Lucky continued. “You were such a great, big, perfect target, standing there like that.”

“I think Harvard let you shoot him. I think he was just trying to score some sympathy from PJ,” Wes threw in. “Is she hot or is she hot?”

“I am,” Wes said. “In fact, there’re few things I respect more than an incredibly hot woman. Look me in the eye, Senior Chief, and tell me that you honestly don’t think this lady is a total babe.”

Harvard had to laugh. Wes could be like a pit bull when he got hold of an idea like this. He knew if he didn’t admit it now, Wes would be on him all night until he finally caved in. He met Crash’s amused gaze and rolled his eyes in exasperation. “All right. You’re right, Skelly. She’s hot.”

“See? The Senior Chief was distracted,” Bobby told Lucky. “That’s the only reason you were able to hit him.”

“Yeah, his focus was definitely not where it should have been,” Lucky agreed. “It was on the lovely Ms. Richards instead.” He grinned at Harvard. “Not that I blame you, Senior Chief. She is a killer.”

“Are you gonna go for her?” Wes asked. “Inquiring minds want to know. You know, she’s short, but she’s got really great legs.”

“And a terrific butt.”

Wes smiled blissfully, closing his eyes. “And an incredible set of–”

“Well, this is really fun.” Harvard looked up to see PJ Richards standing directly behind him. “But aren’t we going to talk about Tim and Charlie and Greg’s legs and butts, too?” Her big brown eyes were open extra wide in mock innocence.

Harvard was the first to move, pushing back his chair and standing up. “I have to apologize, ma’am–”

The feigned curiosity in her eyes shifted to blazing hot anger as she glared up at him from her barely five feet two inch height.

“No,” she said sharply. “You don’t have to apologize, Senior Chief Becker. What you have to do is learn not to make the same disrespectful mistakes over and over and over again. What you as men have to do is learn to stop dissing women by turning them into nothing more than sex objects. Great legs, a terrific butt and an incredible set of, what, Mr. Skelly?” She turned her glare to Wesley. “I have to assume you weren’t about to compliment me on my choice of encyclopedias, but were instead commenting on my breasts…?”

“Well, you get points for honesty, but that’s all you get points for,” PJ continued tartly. She looked from Wes to Bobby to Lucky. “You were the first three tangos I shot out there tonight, weren’t you?” She turned to Crash. “Exactly how many members of your team were hit tonight, Mr. Hawken?”

“Six.” He smiled very slightly. “Four of whom you were responsible for.”

“Four out of six.” She shook her head, exhaling in a short burst of disbelief as she glared at the SEALs. “I beat you at your own game, and yet you’re not talking about my shooting skills. You’re discussing about my butt. Don’t you think there’s something really wrong with this picture?”

Lucky looked at Bobby, and Bobby glanced at Wes.

Bobby seemed to think a response was needed, but didn’t know quite what to say. “Um…”

PJ still had her hands on the hips in question, and she wasn’t finished yet. “Unless, of course, you think maybe my shooting was just dumb luck. Or maybe you think I wouldn’t have been able to hit you if I had been a man. Maybe it was my very femaleness that distracted and stupified you, hmmm? Maybe you were stunned by the sight of my female breasts — which, incidentally boys, are a meager size 32B and can barely be noticed when I’m wearing my combat vest. We’re not talking heavy cleavage here, gang.”

She turned her glare back to him. “Am I amusing you, Senior Chief?”

Damn, this woman was mad. She was funny as hell, too, but he wasn’t going to make things any better by laughing. Harvard wiped the smile off his face. “Again, I’d like to apologize to you, Ms. Richards. I assure you, no disrespect was intended.”

“Maybe not,” she told him, her voice suddenly quiet, “but disrespect was given.”

As he looked down into her eyes, Harvard could see a weariness and resignation there, as if this had happened to her far too many times before. He saw sheer physical fatigue and pain, too, and he knew that her head was probably still throbbing from the blow she’d received earlier that evening.

Still, he couldn’t help thinking that despite everything she’d said, Wesley was right. This woman was smoking hot. Even the loose-fitting T-shirt and baggy fatigues she wore couldn’t disguise the lithe, athletic and very female body underneath her clothes. Her skin was smooth and clear, like a four-year-olds, and a deep rich shade of chocolate. He could imagine how soft it would feel to his fingers, how delicious she would taste beneath his lips. Her face was long and narrow, her chin strong and proud, her profile that of African royalty, her eyes so brown the color merged with her pupils, becoming huge dark liquid pools he could drown in. She wore her hair pulled austerely away from her face in a ponytail fastened at the back of her head.

Yeah, she was beautiful. Beautiful, and very, very hot.

She stepped around him, heading toward the bar. Harvard caught up with her before she was even halfway across the room.

“Look,” he said, raising his voice to be heard over the cowboy music blaring from the juke box. “I don’t know how much of that conversation you overheard–”

“The truth is, you were a distraction out there tonight. To me. Having you there was extremely disconcerting.”

She had her arms folded across her chest, one eyebrow raised in an expression of half-disdain, half-disgust. “And the point of your telling me this is…?”

He let his eyelids drop halfway. “Oh, it’s not a come on line. You’d know for sure if I were giving you one of those.”

Her gaze actually faltered, and she was the first to look away. What do you know? She wasn’t as tough as she was playing.

Harvard pressed his advantage. “I think it’s probably a good idea for you to know that I believe there’s no room in this kind of high-risk joint FInCOM/Military endeavor for women.”

PJ gave him another one of those ‘you’ve lost your mind’ little laughs. “It’s a good thing you weren’t on the FInCOM candidate selection committee, then, isn’t it?”

“I have no problem at all with women holding jobs in both FInCOM and in the U.S. Military,” he continued. “But I believe that they — that you — should have low-risk supporting roles, doing administrative work instead of taking part in gun battles.”

“I see.” PJ was nodding. “So what you’re telling me is that despite the fact that I’m the best shooter in nearly all of FInCOM, you think the best place for me is in the typing pool?”

Her eyes were shooting flames.

Harvard stood his ground. “You did do some fine shooting tonight. You’re very good, I’ll grant you that. But the fact is, you’re a woman. Having you on my team, out in the field, in a combat situation, would be a serious distraction.”

“That’s your problem,” she blazed. “If you can’t keep your pants zipped–”

“It has nothing to do with that and you know it. It’s a protectiveness issue. How can my men and I do our jobs when we’re distracted by worrying about you?”

PJ couldn’t believe what she was hearing. “You’re telling me that because you’re working with a stone-age mentality, because you’re the one with the problem, I should be the one to adapt? I don’t think so, Jack. You’re just going to have to stop thinking of me as a woman, and then we’ll get along just fine.”

It was his turn to laugh in disbelief. “That’s not going to happen.”

His smile was nowhere to be seen, and without it, he looked hard and uncompromising. “You know, it’s likely that the only reason you’re here is to fill a quota. To help someone with lots of gold on their sleeves be PC.”

PJ refused to react. “I could fire those exact same words right back at you — the only Black man in Alpha Squad.”

He didn’t blink. He just stood there, looking at her.

Lord, he was big. He’d changed into a clean T-shirt, but he still wore the camouflage fatigue pants he’d been wearing earlier tonight. With his shirt pulled tight across his mile-wide shoulders and broad chest, with his shaved head gleaming in the dim barroom light, he looked impossibly dangerous. And incredibly handsome in a harshly masculine way.

No, Harvard Becker was no pretty boy, that was for sure. But he was quite possibly the most handsome man PJ had ever met. His face was angular, with high cheekbones and a strong jaw. His nose was big, but it was the right length and width for his face. Any smaller, and he would’ve look odd. And he had just about the most perfect ears she’d ever seen — just the right size, perfectly rounded and streamlined. Before the war game, he’d taken off the diamond stud he always wore in his left ear, but he’d since put in back in, and it glistened colorfully, catching snatches of the neon light.

But it was Harvard’s eyes that PJ had been aware of right from the start. A rich, dark golden-brown, they were the focal point of his entire face, of his entire being. If it were true that the eyes were the window to the soul, this man had one powerfully intense soul.

Yeah, he was the real thing. 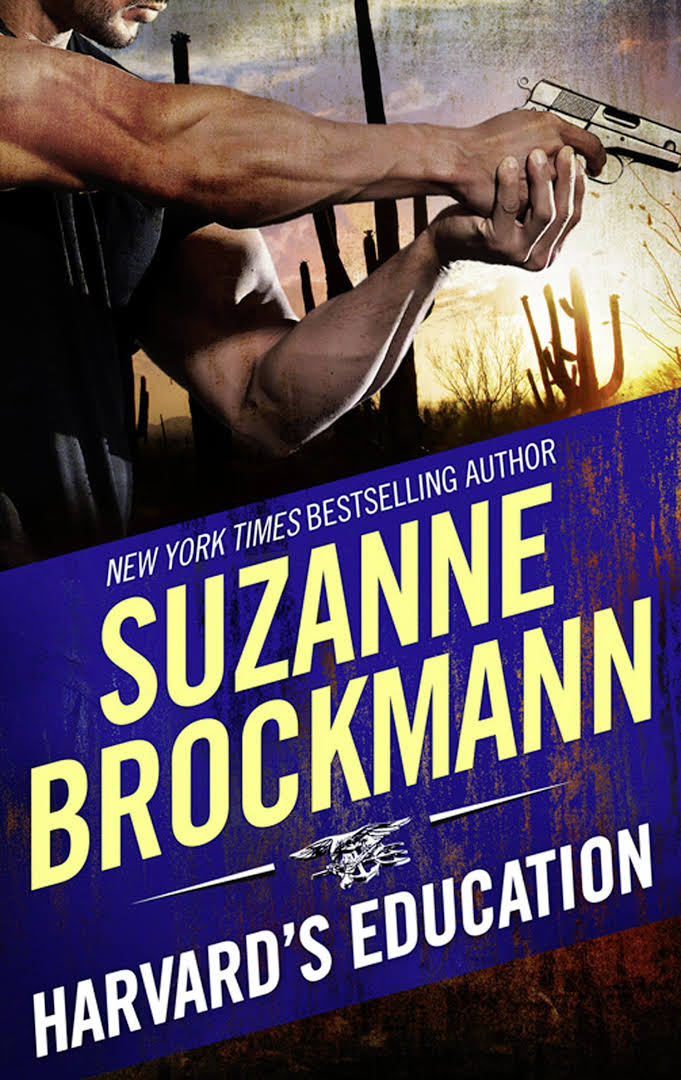 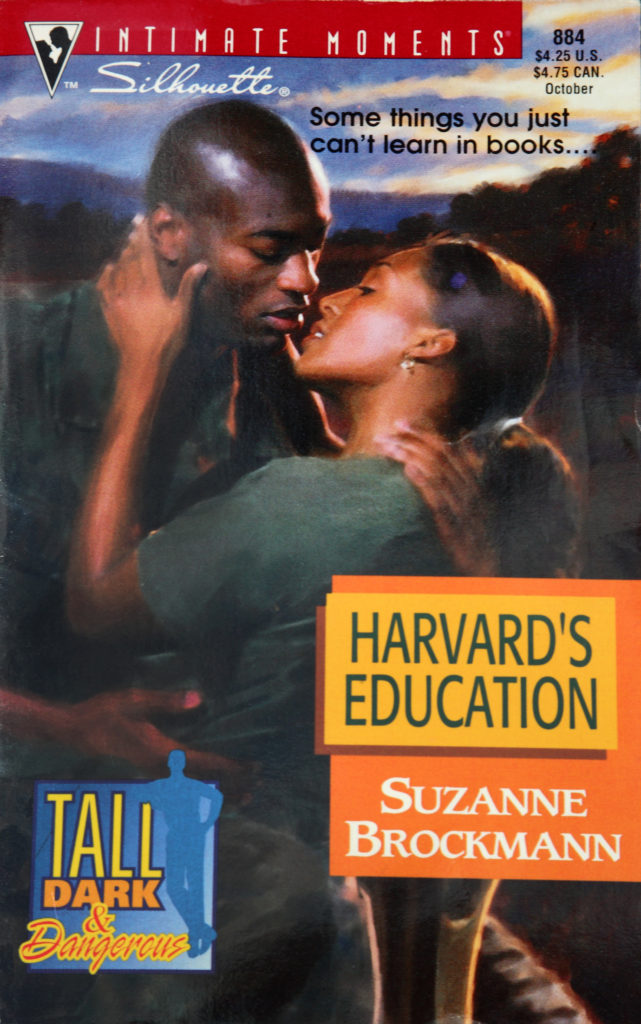