Either way he was a condemned man.

So here I sit, writing letters that have no hope of reaching you until I am free to deliver them myself. With luck, that will be soon. For your eighteenth birthday is coming, and I intend to be there…

For years, a trumped-up charge–and a Central American prison cell–kept Jax Winchester from claiming the girl he loved. Now he was a free man. Or was he?

For only the memory of Kelly O’Brien– and the letters he’d composed to her–had kept him going. But once he was released, he knew he was still a prisoner–in a jail of his own making. The way out this time? Keep that promise he’d made to Kelly all those years ago–and claim her for his own… 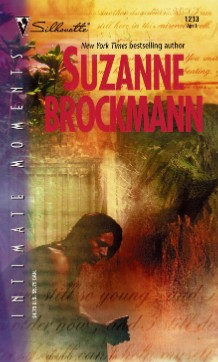 Four and a half stars and a Top Pick — Romantic Times

“LETTERS TO KELLY is a touching story of love delayed. This is a fast read; I know I stayed up all night to read it and will certainly go on my keeper shelf. Ms. Brockmann is best known for her Seals books, but this one should not be dismissed because it isn’t one. It’s well worth the price and will have you smiling and laughing.” 4 ½ plugs, — Wendy Keel, The Romance Readers Connection

Note From Suz: Letters to Kelly is a story I wrote a loooong time ago and originally sold to Meteor’s Kismet line (which folded before LTK was released). Silhouette Intimate Moments has since snapped it up, and it will be released in April, 2003. It’s a little bit different from my other series romances — kind of quirky and odd. (And I mean odd in a good way.)

The hero is T. Jackson Winchester the second, and the heroine is Kelly O’Brien, the significantly younger sister of his former college roommate. Jax and Kelly met when he was a first year student, and she was 12 or 13, and became fast friends despite their age difference.

Jax has been in love with Kelly for years, but their timing has been dismal. When the book starts, she’s back in college in Boston after a bad marriage and a divorce, and he’s hoping to start something new with her. She’s not interested, and his frustration begins to build.

Kelly doesn’t know it, but wealthy, pampered Jax has become a hardworking writer. Throughout LTK, he’s writing his next book, and his hero, Jared, often misbehaves. (As heroes usually do…)