Ivy League college professor Ellen Layne and her two kids are spending the summer in NYC with her very famous uncle, the star of a late night TV talk show. Recently divorced, it’s her summer of crazy indulgences—and when she meets Sam Schaefer, a New York police detective who’s much too handsome, much too smooth, and much, much too young, she doesn’t say no, thinking their steamy encounter in the back of a limo is one-and-done.

But Sam knows what he likes and he wants more. And when he keeps calling, Ellen’s Oh, yes becomes a heartfelt No way—he’s funny, and smart, and pretty damn perfect, and she knows it won’t take much for her to fall for him, hard. He’s too handsome, too smooth, and ridiculously young.

But when Ellen’s uncle starts getting threatening letters from a clearly unhinged and dangerous stalker, the NYPD is called in and of course Sam’s assigned the case. Ellen tries to avoid him, but he’s around day and night, and sparks start to fly… 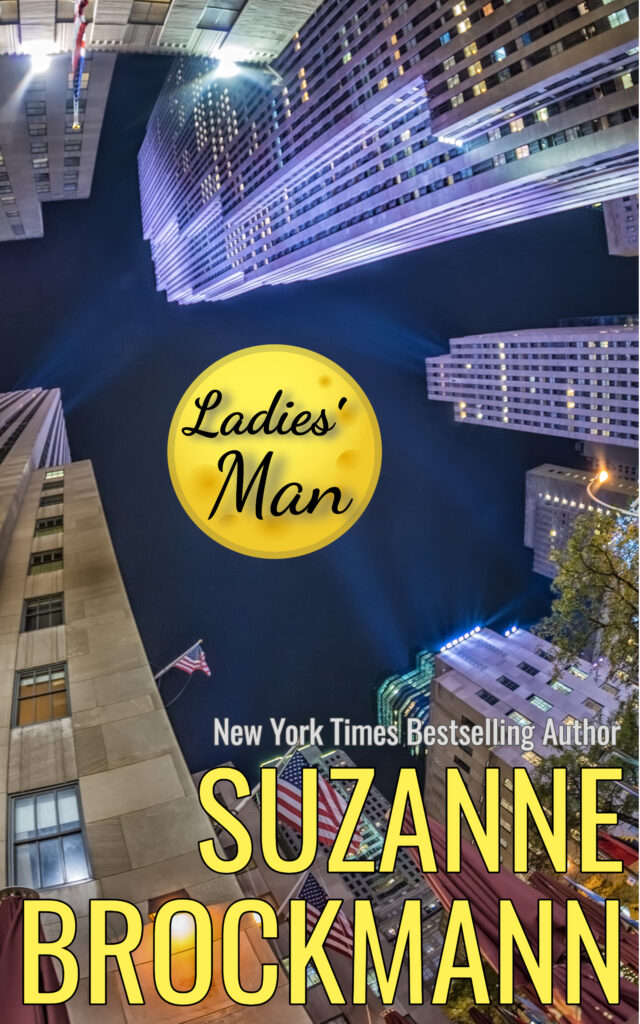 Note From Suz: Back in 1999, a reader wrote to ask: “I would still like to find out why someone told me LADIES MAN was pulled and destroyed. Is that accurate? Is that why every bookstore in God’s Creation has either never seen it or actually never heard of it?”

My reply: Ah, LADIES’ MAN. I sold this book to Loveswept as part of a seven book promotion that was offered to their mail order subscribers only. (In fact a number of hard-core Suz Brockmann readers joined the LS subscriber service in anticipation of this book!)

LADIES’ MAN was book four in the special promotion. Books one through three were sent out, and LADIES’ MAN was printed and ready to go (tens of thousands of books in the warehouse) when the publicity/promotion department at Bantam changed hands, and this particular promotion was killed. Books five through seven were repackaged and resold as regular retail-store available Loveswepts. But LADIES’ MAN had already been bound in books that didn’t have a price or a barcode on the cover. According to my contract, I was to receive 100 author copies of this book.

When I found out that the promotion was discontinued and that LADIES’ MAN wasn’t going to be sent to subscribers, I called my editor to ask if she could send me as many boxes of this book as possible. I’d received 1000 copies of my first book, FUTURE PERFECT, and was using as a successful promotion — offering a free signed copy to readers who sent me a book-sized SASE! I figured I could do the same with LADIES’ MAN — give it away.

However, she called me back later that same afternoon and told me that all those tens of thousands of copies of the book had just been destroyed. ARGH.

She’d received irate email from the people who’d joined the subscribers list to get this book, and had sent out a few copies herself to appease them. But other than that, as far as I know, the only copies of this book that are currently in circulation came from that box of 100 that I received. (My own supply is down to about 10…)

I’ve given copies away to organizations to raffle off for a good cause. (I raised over $1500 for one of my favorite charities, the Cabel/Lincoln County Workcamp, last June by raffling off a copy.) I’ve seen copies sell on Amazon.com for $480! (A copy sold in January 2003 for $1042 on e-bay! Wow!)