Countdown to Born to Darkness

until Born to Darkness
hits bookstores and eReaders

A hefty excerpt from Scribd (the first 29 pages of BORN TO DARKNESS!) and a trailer from The Perfect Wedding.

About THE PERFECT WEDDING…

So about a year and a half ago, I was talking on the phone with my son, Jason. And he was complaining about the fact that there weren’t really that many movies about GLBT characters that he could relate to.There were (and are!) a whole bunch of angsty coming out stories — but as someone who anounced his sexual orientation at age fifteen without any angst at all, Jason can appreciate those movies, but not really relate.There were (and are!) movies where being in the closet (or having to get jammed back into the closet due to an impending visit from parents/grandparents/boss/xxxx?) provides the comedy. Also something that Jason can’t relate to, having never really been in the closet.There were (and are) sex romps — but Jason’s a traditional guy. He’s out there living his life and looking for Mr. Right, with a long term goal of settling down and having a family. So again, not much there to relate to.So I’m on the phone with Jace, and we come up with an idea to write a screenplay that’s kind of a classic rom-com — except the two main characters are a hero and a hero. But none of the comedy or conflict comes from the fact that they’re gay. They just HAPPEN to be gay. Everyone’s out of the closet, eveyrone’s family loves them.

We came up with this idea about a guy named Roy — who happens to be gay — who is friends with another guy named Gavin (who also happens to be gay). And Roy gets a call from Alana, one of his best friends from college, because she is getting married in the summer. And she wants Roy to come to her house over the Christmas holidays to help her plan her wedding. (Her mom is going a little momzilla on her, and she’s hoping Roy will help deflect that.)

Problem is, Roy used to have a Thing with Alana’s brother Paul, and Roy hasn’t seen Paul since he caught the a-hole with another guy. Their breakup was pretty ugly, and even though Paul is now eighteen months clean and sober (and repentent), Roy can’t handle the stress and he asks Gavin to come along to the wedding-planning-holiday-weekend, and (wait for it — classic rom-com situation coming…) pretend to be Roy’s new boyfriend.

There’s a subplot with Alana and her out-of-control wedding (she wants a little, quiet ceremony, at sunset on the beach, and Mom is planning trumpet fanfares), a subplot with Alana and Paul’s parents who have just found out that Dad has early onset Alzheimer’s. (In other words, there are, like most of my books, three couples in various stages of their relationships.)

Writing the script with Ed and Jason was a hoot.

We knew we had something special, and we wanted to keep control over the project, so we decided to produce it ourselves.

We found an awesome director, Scott Gabriel, and together we started to put together a cast and crew.

And we knew we had a juicy part in Meryl, the mom, for an actress in her fifties or sixties. (This is NOT a “Honey, dinner’s ready!” role!) So we set about finding a name actress to work on our movie, even though we couldn’t afford to pay a whole lotta money. Cool thing? We imagined Kristine Sutherland, who plays Buffy’s mom, Joyce Summers, in BUFFY THE VAMPIRE SLAYER as our Meryl. And Ed, with his cajonnes grande, contacted her agent and sent her our script.

Long story short, Kristine loved it, loved Meryl — and wanted to play her.

And then we really lucked out and got James Reborn (who has done massive amount of Hollywood movies, including INDEPENDENCE DAY, REAL STEEL, and who most recently plays Claire Dane’s father on HOMELAND) for Richard, Paul and Alana’s dad.

We found a really talented young actor from Miama named Eric Aragon to play our handsome lead, Paul. (And yeah, I know from the blurb above it sounds a little as if Roy’s the lead, but really, the story is Paul’s.) And Jason, who co-wrote the script, plays Gavin.

We hired a crew of about fifty people (including our post-production team) and with our cast of nine main characters, we went into production. And for about twenty very long days, last June, we filmed our movie.

We’ve been in post-production ever since — editing, and sound editing, and adding music (written by the amazing Jack Gravina).

As soon as the movie’s finished (any… day… now…) we’ll be entering it in film festivals (both LGBT and mainstream film fests) across the United States — and around the world.

Tomorrow (along with the release of BORN TO DARKNESS) I’m going to be making an announcement about our premiere showing. I wish I could tell you about it today, but I can’t. But I can tell you this: We now have a date, time, and location for the premiere screening of THE PERFECT WEDDING.

So be sure to come back tomorrow to find out that info!

Until then, here’s the first version (a work in progress!) of our movie “one sheet,” or poster: 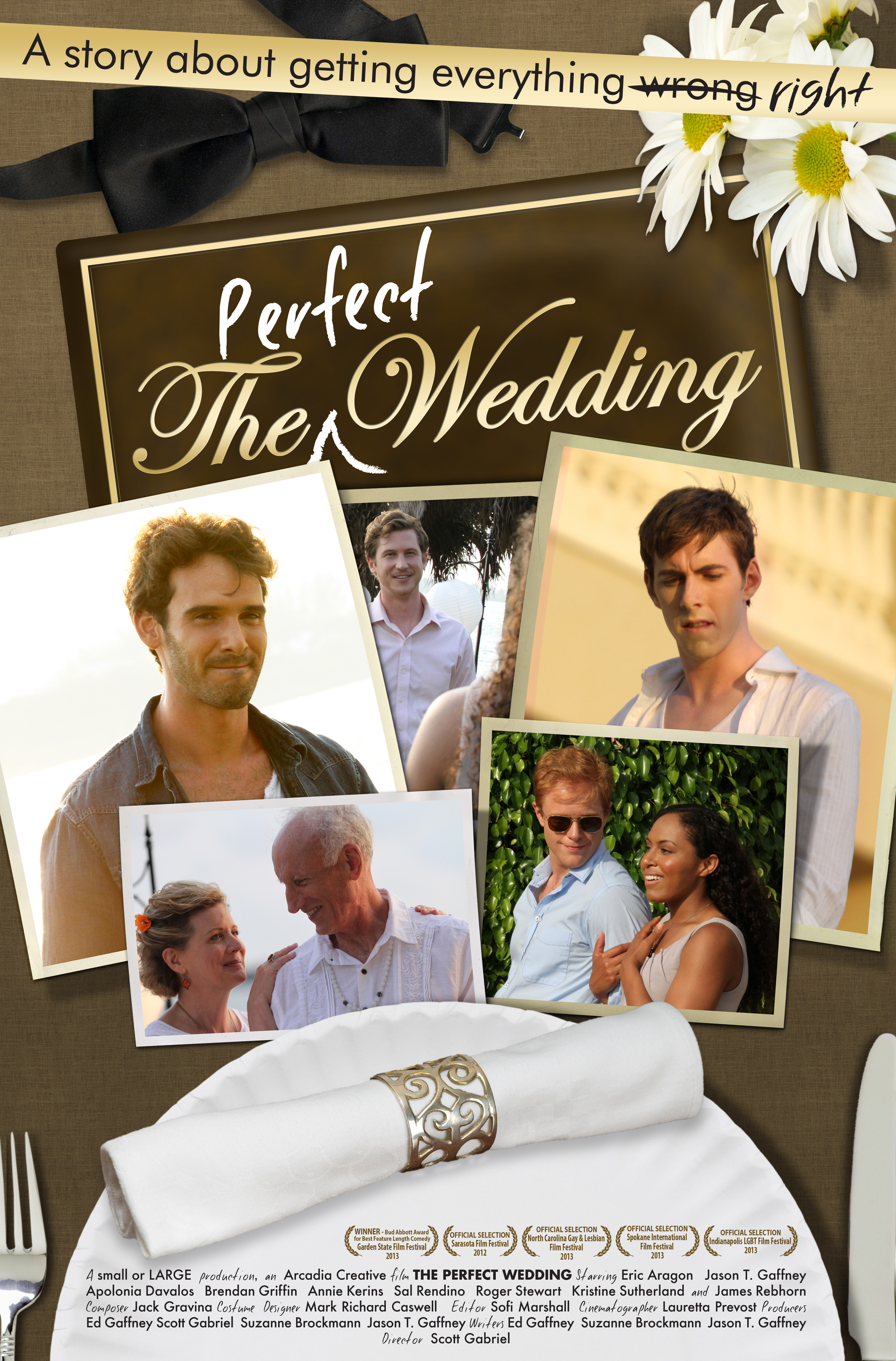 That’s today’s countdown. (And yes, we are an official selection of the Sarasota Film Festival!)

Find out more about the movie at www.ThePerfectWeddingMovie.com

Come back tomorrow to celebrate the release of BORN TO DARKNESS and get some cool news about the premiere screen of my movie, THE PERFECT WEDDING!