Lieutenant Jim “Spaceman” Slade couldn’t keep up as his SEAL Team ran across the barren desert.

True, his team for this training op was almost entirely tadpoles—relatively new additions to SEAL Team Ten—which meant they were significantly younger than he was.

In a world where you were the “old man” at twenty-eight, Jim’s thirty-four years made him ancient. Especially for a big guy. And like most of the bigger SEALs in the Teams, Jim felt his advanced age most prominently in his rapidly decaying knees.

His men somehow knew he was hurting—his poker-face was perhaps a bit too tight—and they slowed down. For him.

A SEAL Team was only as fast as its slowest member.

And having a member as slow as Jim could get the entire team killed.

Not here, in this SoCal desert, a short helo ride from the Navy Base in Coronado, but out in the sandbox in A-stan and points unknown, for damn sure.

“Yo’kay, sir?” Petty Officer Rio Rosetti slowed to run beside Jim. He was one of those lean, compact, wiry guys. Provided he made chief, he’d probably still be a SEAL—and outrunning future tadpoles—well into his fifties.

But Jim couldn’t hate the kid. He could only hate himself.

The other two tadpoles—Thomas King and David Williston, the newest member of Team Ten—joined Jim on his other side. King spoke up. “How can we help, sir?”

So Jim did something that he wouldn’t’ve been able to do, had this been a Real World mission, and not just a training op.

He took himself out.

“New scenario,” he told them, as he slowed to a stop. He wasn’t out of breath—that wasn’t the issue. He was aerobically fit. But his freaking knee—the left one, the “good” one—was on fire. “Your team leader—me—sustained a direct hit from a mortar round. There’s nothing left; nothing to carry out; nothing to bring home.” He looked at King who, as a lieutenant junior grade, was the highest ranking among them. “You’re now in charge, Lieutenant. Complete the mission, and get your men safely to the extraction point.”

Normally imperturbable, King’s dark brown eyes widened just a little. “Aye, aye, sir, but before I leave you here, outside of the context of this training op, I must ask: do you need medical aid?”

“I can find my own freaking medical aid,” Jim growled at the kid.

Now King didn’t so much as blink. Clearly he’d made note of the fact that Jim had not said no. “With all due respect, LT—”

Jim cut him off. “I have my phone, I have flares, and I have a shit-ton of pain in my knee that’s going to require another month or two of rest.” At best. He’d just come off of an extended rest period, after having surgery on his “bad” knee, which was now his new “good” knee, which meant it was only throbbing in contrast to the stabbing fire lighting up the other. “Trust me, the few short minutes that I’ll be alone after you leave and before the hospital corpsmen find me will be time well-spent, managing my goddamn frustration.”

Rio spoke up. “I’ll hang back, sir,” he addressed King, “just a bit, until the corpsmen make contact with the LT. Then I’ll run to catch up.”

The kid was faster than the rest of the team.

“I don’t need a babysitter—” Jim started, but King cut him off.

And just like that, they were gone. Even Rio, who moved off with the team toward the horizon, where he’d hover to make sure… what? That Jim didn’t get eaten by a giant sand lizard…?

He sighed as he used his phone to call for medical assistance, then sat down in the dirt to wait. The morning was hot and the sky was blue—and some kind of vulture circled closer to check him out.

He already knew what his options were. More surgery. He didn’t have to like it, he just had to do it. But he’d already had both knees done. He’d spent more time in the hospital and physical therapy in the past few years than he’d spent out on missions. And as much as he hated staying behind to heal and rest, he knew he’d hate it more if he went out on an op and couldn’t keep up.

Which meant he’d have to face the idea of pulling himself permanently out of the Teams. Or—worse yet—getting pulled out.

The idea made his anger and frustration fade and left him feeling… what?

As the helo with the medical team finally approached with a wash of noise from the blades, Jim stood and waved to Rio, who waved back and finally vanished, ready to run at his top speed for however many miles, probably without breaking much of a sweat.

The way Jim used to do when he first earned his Budweiser and joined Team Ten over a decade ago.

What was he, if couldn’t be a Navy SEAL?

Ashley DeWitt quickly ducked behind the Dumpster that sat in the corner of her condo association’s parking lot.

Dear, sweet God! The smell back here was horrific. Tomorrow morning was weekly garbage pickup day and the container was already overflowing. Add the heat of the southern California sun…

And yet here she crouched in full cowardly-hiding mode, despite the eyeball-melting stench.

She peeked around the corner and…

She quickly pulled back, because yes, that was Brad—not just some random man who looked vaguely Brad-like. Tall, lean, early thirties, with closely cropped light-brown hair and blue eyes, a lot of men looked like Brad. Particularly when he wore one of his expensive dark suits with a white shirt that showed off his gleamingly handsome, golf-tanned face.

After a year of silence, her crazy ex-boyfriend had begun emailing and calling again. Can we meet? We really need to talk.

She’d blocked and deleted, choosing to use silence as her answer. But now he’d shown up at her condo door—which was a little alarming because it had been years, plus a cross-country move, since she’d seen him last. During their tumultuous breakup, when Brad had gone into the worst of his I know if I just keep showing up, you’ll take me back phase, she’d lived in Boston, in a student-level apartment in a relatively sketchy neighborhood, with her best friend Colleen.

But shortly after graduation from law school, Colleen had gotten married to the man of her dreams. She’d happily moved to Southern California, passed the bar, and gotten a job practicing family law in the San Diego suburb of San Felipe. It wasn’t too long before she’d talked Ashley into moving out here, too, to work with her at the very same small law firm.

Colleen had wanted Ashley to move into the guest bedroom of the apartment she and her husband shared, mostly because she knew Ashley hated living alone. But they were newlyweds, so Ash had bought this condo with the money she’d inherited from her grandmother—her mother’s mother—and tried her best to feel confident and safe.

Although, the truth was, Ashley couldn’t remember a time since her incredibly protected and, yes, privileged childhood that she’d felt completely safe.

Which was why she spent a great deal of time exactly like this—quivering with fear as she hid from conflict.

Just this morning, over at the courthouse, she’d escaped into the ladies’ room to avoid an altercation with Greg Ramsey, the always-angry husband of one of her clients. Ashley represented his soon-to-be-ex-wife Betsy in a messy divorce. And instead of standing her ground and coolly admonishing Mr. Ramsey over his inappropriateness, and reiterating that all communication between he and his wife needed to come through his lawyer, Ashley had chosen, instead, to hide from the man.

Truth was, she was a little afraid of him.

Real truth was, outside of the structured control of the courtroom, she was a little afraid of everyone and everything.

And okay, she wasn’t that much of a wimp. She wasn’t afraid of her younger brother Clark, and Clark’s college roommate, Kenneth.

As Ash peeked out from behind the Dumpster again, she saw Brad getting into a car parked in one of the slots set aside for visitors. Her heart sank as she saw that it was a black Lexus with darkly tinted windows and California plates. No way was that a rental car, which meant he was most likely living here again, in California, where he’d gone to college, and a mix of fear and anger made her throat tighten.

She’d slept better when he’d lived on the other side of the country, in New York. Not because she thought he’d hurt her. He wasn’t violent, he wasn’t even close to a psycho stalker. At least she didn’t think he was.

But she was afraid that he was right. And that if he pressured her hard enough, she’d do something really stupid and weak, like finally give in, forgive his lies, and take him back.

And, God help her, she was too much of a coward to face him. 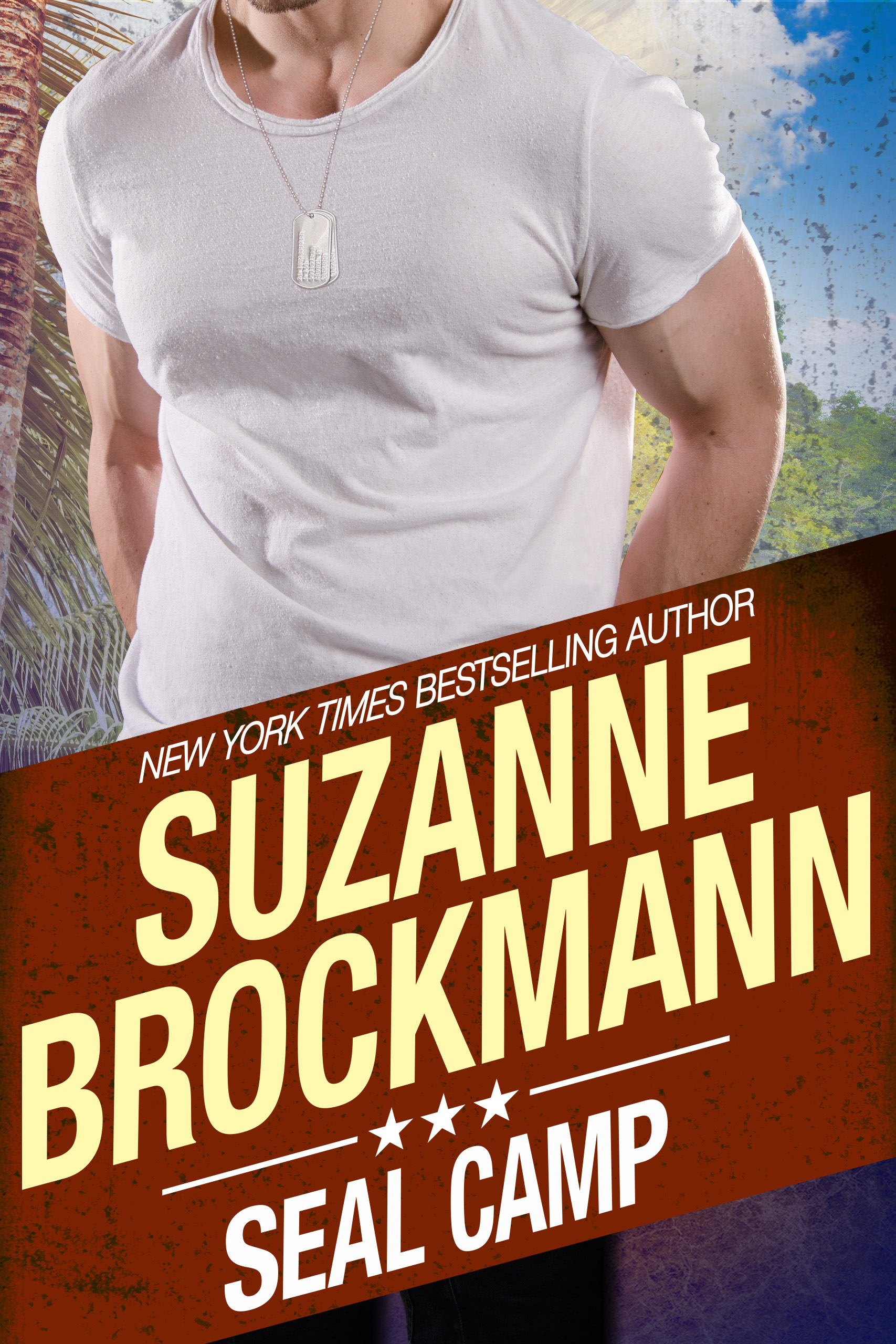