3-in-1: Beginnings & Ends, When Tony Met Adam
plus Murphy’s Law

Beginnings & Ends: Reissue originally e-published in June 2012
A Troubleshooters short story
Jules and Robin find that endings can be the start of something new…

After years of playing the tormented actor, Joe Laughlin, on the hit television show Shadowland, Hollywood star Robin Chadwick Cassidy is ready for a change. Joe’s character embodies the real demons of Robin’s past—his struggle with his sexuality, his battle with alcoholism—and portraying the part has taken a heavy toll on his personal life. Robin’s husband, FBI agent Jules Cassidy, has noticed the strain and will do whatever he can to make Robin happy. And what Robin has in mind will forever transform his career, his marriage, and his family.  (Around 12K words or 60 pages)

When Tony Met Adam: Reissue originally e-published in June 2011
A Troubleshooters short story in celebration of the repeal of Don’t Ask, Don’t Tell.
Navy SEAL Tony Vlachic meets out gay actor Adam Wyndham at the end of 2007’s All Through the Night and sparks fly...

Navy SEAL Tony Vlachic has kept his sexual orientation a secret for years under the threat of “Don’t Ask, Don’t Tell.” That is, until he meets Adam Wyndham, a charismatic yet troubled movie star. Tony knows he’s risking his military career when he approaches Adam in front of his SEAL teammates. And Adam, nursing a broken heart, has no interest in a relationship. Still, neither man can deny their instant attraction.

Tony didn’t become a SEAL by accepting rejection, and his pursuit of Adam leads to one unforgettable night. But the next morning, Tony is ordered to ship out to Afghanistan with SEAL Team Sixteen, and he’s forced to leave Adam with too much unsaid. As Tony enters a dangerous war zone, Adam has to choose between keeping the home fires burning, or taking a blow torch and igniting the hope of a new relationship with a perfect-for-him man, and burning it all to the ground.

When Tony is injured, the two men must face their feelings for each other, and with a little help from some friends—Tony’s SEAL teammates of Izzy, Jenk, Lopez, and Gillman, and Adam’s longtime frenemy, Troubleshooters operative Sam Starrett—they must decide if what they’ve found together is worth risking even more than their hearts. (Around 19K words or 80 pages)

With a bonus e-short…

Jim Murphy and Andrea Patterson attend the same high school, but they don’t meet until days before Andi leaves for college and Jim joins the Navy. It’s not until six years later, as Jim’s accepted into the Navy SEALs BUD/S training program that he takes a chance and hand delivers some letters that he would have sent years ago, if he’d only had Andi’s address. But it’s never too late to start again, as Andi finds out when she comes up against Jim’s upbeat, revised version of Murphy’s Law. (Around 7500 words)

All three stories, combined, are around 38,000 words or 200 pages. Annotated by the author, this 3-in-1 collection is available in e-book and print on demand, as well as individually as e-shorts. 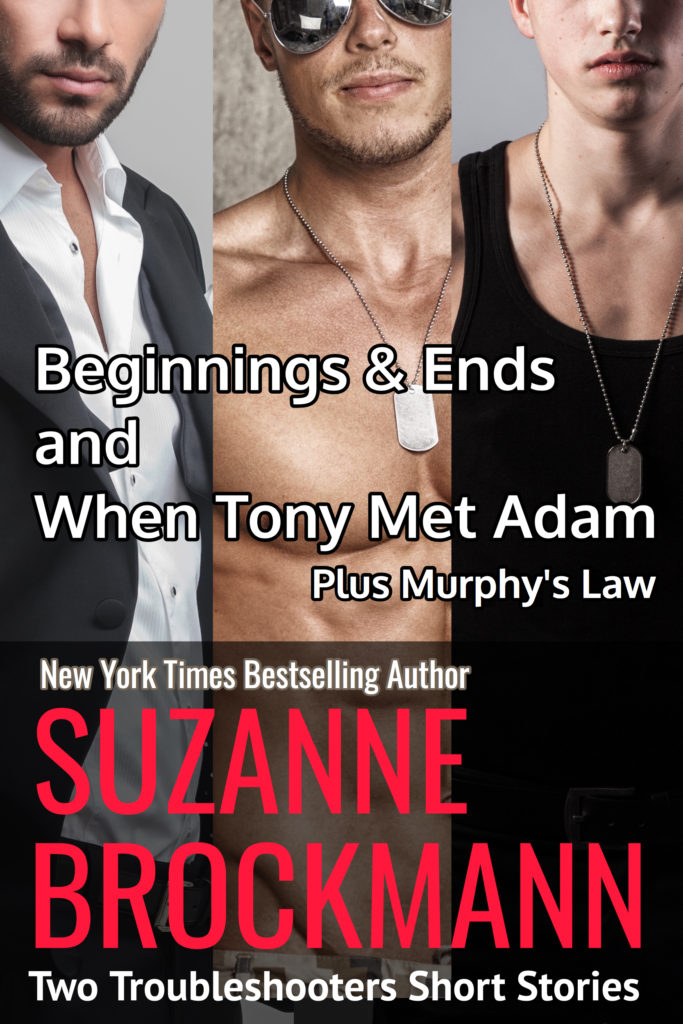